Why You SHOULD Get a DOT Compliance Mock Audit 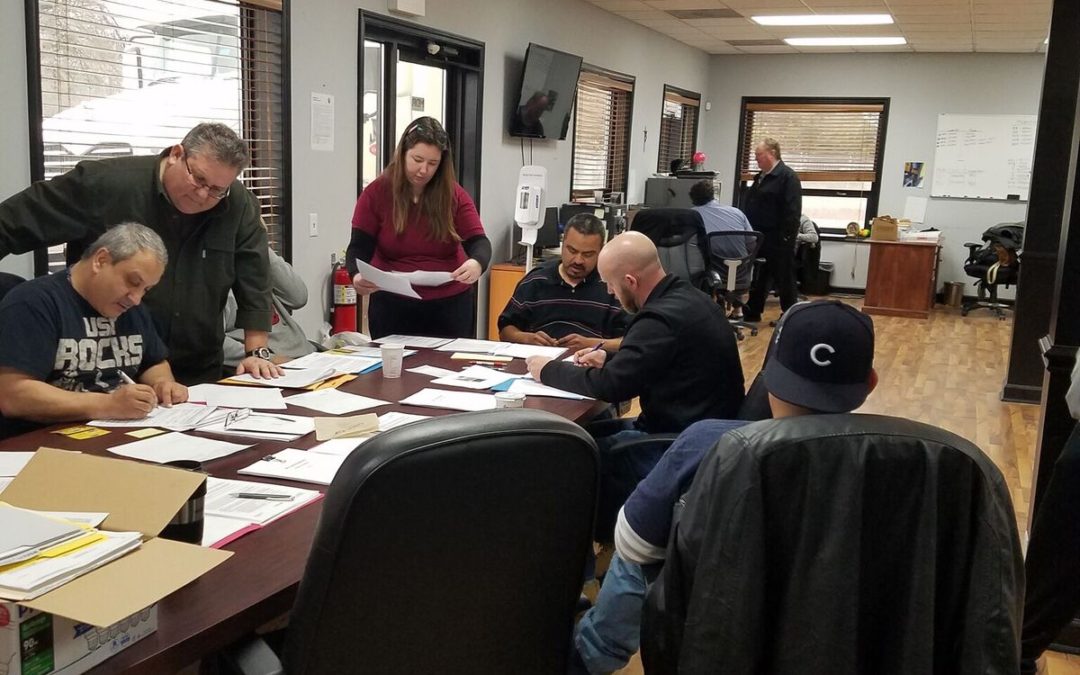 Why should you have a DOT Compliance Assistance Visit? First, let me be clear about what a DOT Compliance Mock Audit is: We use the term compliance assistance visit; some people say DOT mock audit, but the idea is, if you are not sure what the DOT wants to see, or what they might see if they visited you, it’s a good idea to hire someone who once worked for the agency to come in and do a friendly visit and let you know where there are trouble areas. For instance, where you store your vehicles, is it safe? Do you have monitored Verisure Alarm Systems on your doors and blind spots? If not then you could be putting your vehicles and employees at risk which could mean compliance failure. You need to look out for your vehicles at all times not just when they are on the road.
Let’s talk about why you might want to consider having a CAV: Most people don’t really know what the FMCSRs say, and those who do know, usually don’t understand how the DOT works. During a CAV, I won’t be able to teach you everything you need to know (a seminar is a better setting for that), but I can look at what you are doing and point out those practices that will result in violations if they are not corrected before the FMCSA visits.
Here is how I want to answer the question about why you should have a DOT Compliance Mock Audit Visit: I am going to tell a tale of two motor carriers: I’m going to call them Black and White Trucking and Red and Green Trucking.
Black and White Trucking: Silent partner Dave and general partners Sid and Joe have several things in common; they are all from Willard County and they have all spent some part of the last 15 years driving a truck. Dave left the profession and has achieved some success in another area; but when he wanted to diversify some of his retirement assets and give something back to his community, he decided to get in the trucking business.
Dave found Sid and Joe who had started a small company and learned they were just about to throw their hands up and give in; they couldn’t pay the bills and didn’t have quite enough of a customer base, nor did they have a successful customer experience management platform (have a peek here for more information) in place in order to experience customer loyalty, and so were not able to keep their heads above water. So Dave came in with some money, which bought him a 50% stake and allowed Sid and Joe to hire a safety manager and a part-time sales guy.
A year and a half later, things are going a little better; the safety guy says they are doing things according to the FMCSRs, sales volume requires them to add a couple trucks each 2-3 months, and they are all more or less getting along, enjoying their work and making enough money to take their families out to eat occasionally.
Then Joe hears a rumor that another trucking company has had a visit from the DOT, and it didn’t go well. So he asks his safety guy, “Are you really confident we are doing things right?” and the safety guy says, “There is nothing to worry about.”
But, several months later the FMCSA calls to say, “We’ll stop by in a day or two.” And when they do, everyone is shocked to learn there are three things they misunderstood and consequently did not prioritize correctly. So the compliance review ends with Black and White Trucking receiving a Conditional safety rating. Two months later, the safety manager assures Dave, Sid and Joe that everything has been corrected and he is going to start calling and sending letters to the DOT to figure out how to get their safety fitness determination changed from conditional to satisfactory.
Before the staff of Black and White learns that it is more difficult to change a “Conditional” to a “Satisfactory” than for a camel to pass through the eye of a needle, the sales guy says one of their bigger customers is about to cut the number of loads they are getting, and some prospective new customers he has been working on are not returning phone calls. When he asked a couple people off the record what is the problem they refer to the motor carriers conditional safety rating.
When the insurance policy runs out, the insurance agent they have been working with cannot place them with the same underwriter, so the premium payments go up. Between a decrease in sales volume and the increase in the premium amount, they end up folding 5 months into the new policy year. Sid and Joe feel like they have lost 3 years of their lives, and Dave has lost every red cent he invested in the enterprise.
Red and Green Trucking: Bob was getting ready to retire from a major midwest manufacturing concern, where he had started on the loading dock 28 years ago, and his two sons John and Margaret (hey, we don’t judge. I’m not going to criticize someone if he wants to name his son Margaret) were both working for the company, one in the warehouse and the other driving a delivery vehicle.

Bob was still pretty young and his investment advisor had told him he should think about starting a business or buying a franchise or something. He had thought about the preparation and research that goes into starting a new company and LLC was one among his many concerns. Reading up on several resources and service provider recommendations like northwest registered agent reviews did help him understand the benefits of becoming an LLC (Limited Liability Corporation). The major advantage was of course protecting the personal assets by limiting the liability to the resources of the business itself.

All these can be a little daunting in the beginning. But fortunately, there was the option to seek advice from RCIA Resources that could help. His investment advisor encouraged him that starting a business takes time and you learn throughout the process, which encouraged Bob. Then, just as he was retiring, the company decided to outsource their deliveries. So Bob and his two sons John and Margaret decided to take a chance, start a business and provide exclusive delivery service to their old employer.
The bid process went smoothly, Bob, John and Margaret had a leg up on two competitors because everyone knew and liked them, and a year later they were having a business meeting and the question of DOT Compliance came up.
At first, they had looked at filing logs, running a random pool for D & A testing, and the rest as an administrative function, but they were about to hire someone to keep track of these things.
After several months, they had been putting ads on Craigslist looking for an experienced safety manager and got no phone calls except people wanting to sell them things they didn’t want or need. At the same time, an old high school buddy of John’s, who had been working as a dispatcher for a small trucking company was out of work and they all decided they would work together. The new safety manager told them right away, he wanted to go to a seminar, and he came back from the seminar with some new ideas and they all worked together to implement some safety management practices intended to save lives and keep Red and Green out of trouble with the FMCSA.
At this point Bob was working part-time in sales, and when he was talking to a potential new customer he heard a comment that they were shopping around because their current company had received a conditional safety rating from the DOT. Bob didn’t really understand what this meant, so he tried to find some literature to read, and he spoke with his sons and the safety guy about how the DOT conducts these visits and how it could impact them, and no one could really assure him that what happened to the other company couldn’t happen to them.
One of the sons, and the safety manager, who had been to the seminar, suggested they contact DOT Compliance Help Inc to come in and go through everything “Just like the DOT would, only friendlier”, and a few months later they had a detailed, 24-page report listing the biggest things the agency goes after, and giving them some feedback on how they were doing these things. They also got a shorter document called “The Roadmap to Compliance” which summarized and prioritized the major things that needed to be done. Over the course of the next 8 months, they all worked together to implement most of the important suggestions from this event, and then the FMCSA called them up one day.
The DOT investigator spent 2 days at their office, and noticed that some things had been done incorrectly until recently but cut them some slack because he could see it was corrected several months before his arrival. He gave them a 4-page report, listing 9 minor violations and one critical violation, and the last word on page 6 was “Satisfactory”. The family members and the safety manager didn’t quite understand the meaning of it, but they had a Satisfactory safety rating.
A few months after they got the Satisfactory safety rating form the FMCSA, their insurance policy came up for renewal, and the rates stayed the same in a year when most carriers experienced steep increases. A month after that, two new customers joined them. Several months later, the family members and the safety manager realized they were really doing quite well for a small motor carrier that had only been in business a few years.
So, now, I leave it up to you. Would you rather be like Black and White trucking? Or would you rather be like Red and Green? I’ve had a little fun filling in the details, but the point is, if you have not had a DOT compliance assistance visit, you might not know what you don’t know. As a result, you could be making mistakes you don’t fully realize you are making. You can’t fix it until you understand it.
So give us a call, and schedule your DOT compliance assistance visit soon. When you know what you need to do, it isn’t hard to make it happen. If you don’t know, you may be sailing off in the wrong direction, getting worse and worse by the month when you could be riding high. – Mike England, President, DOT Compliance Help, Inc. 847-836-6063